Walmart and HEB stand out in retail customer loyalty

Walmart by far led all retailers in customer loyalty to close out 2021, despite strong performances from other big box operators and supermarket chains, according to consumer intelligence and marketing specialist InMarket.

For the fourth quarter, Walmart achieved a customer loyalty score of 5.68, well ahead of its closest big-box competitor Meijer at 3.58 and above supermarket loyalty leader HEB at 4.63 , Austin, Texas-based InMarket said in its Insights Q4 2021 Consumer Loyalty Report, released Monday.

The only other retailer to top the average score of 3.01 in the big box category was Fred Meyer of The Kroger Co., at 3.39. Target (2.62) and Walmart’s warehouse club affiliate Sam’s Club (2.35) also scored in the top five.

“Among the top five big-box stores, chains like Walmart and Meijer have seen above-average consumer loyalty, likely due to their value-based pricing strategies in the face of rising costs and reports on the ‘inflation,” InMarket said in its report.

Related: Amazon and HEB remain at the top of the dunnhumby grocery rankings

To benchmark retailer customer loyalty, InMarket used permission-based, first-party SDK location data to assess the foot traffic patterns and visit history of US consumers from October through December 2021. Channels were ranked based on their assigned loyalty score, determined by the number of observed visits and normalized month-to-month. For example, according to InMarket, a retailer with 1 million visits from 500,000 devices would have a loyalty score of 2.0, while another retailer with 10,000 visits from 4,000 devices would get a loyalty score of 2.5.

InMarket ranked the top five retailers by loyalty in the segments of mass retail, supermarkets, drugstores, dollar stores, department stores, clothing stores and QSR/CDR restaurants. The average score across all categories was 1.85 for the fourth quarter of 2021. Walmart averaged more than five monthly visits for the quarter, InMarket said. 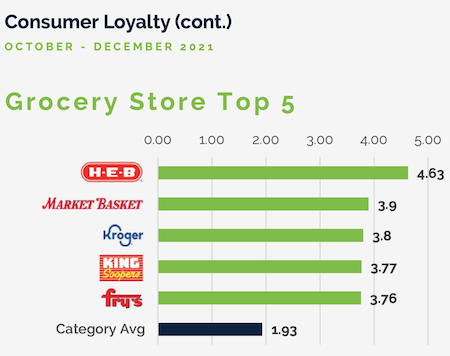 In the grocery sector, HE-B’s rating of 4.63 easily beat the #2 market cart with a customer loyalty score of 3.9. But the results were close, with three Kroger Co. banners rounding out the top five: Kroger at 3.8, King Soopers at 3.77, and Fry’s at 3.76. Supermarkets have an average rating of 1.93.

“Grocery stores like HEB and Kroger were subject to high inflation and supply chain issues, with grocery and food prices rising 6.4% year over year by November 2021” , explained InMarket. “However, these chains all achieved a much higher than average total loyalty score (1.85) as consumers again chose to shop with brands they knew would offer them the right price. “

Pharmacy giant CVS leads the pack with its array of health and wellness offerings, according to InMarket. “CVS topped the charts in Q4 2021, with a loyalty score well above average. Walgreens scored slightly below average as consumer loyalty appeared to be tied to rewards programs and better healthcare offers, such as free vaccines and COVID testing,” the report said.

In the dollar store segment, Dollar General finished first with a customer loyalty score of 2.32, ahead of rival Dollar Tree’s score of 2.03. Rounding out the top five were 99 Cents Only Stores at 1.93, Dollar Tree’s Family Dollar banner at 1.87 and Five Below at 1.67, the only chain among the leaders below the category average of 1 .84.

“Dollar stores like Dollar General, Dollar Tree and 99 Cents Only Stores saw above-average consumer loyalty in Q4 2021, with Dollar General replacing Dollar Tree in the ranks after the latter notably increased prices in inflation, which would have angered consumers and potentially forced them to cede their loyalty to their competitor,” InMarket observed in its analysis. “However, the dollar store model still works effectively as the value proposition of getting more for less continues to appeal to consumers.”

InMarket noted that economic volatility at the end of 2021 — particularly rising prices for food and other goods, coupled with product shortages — has put many consumers in a value mindset.

“In the fourth quarter of 2021, supply chain issues and inflation increasingly worried consumers, prompting businesses to brace for lower demand and slower spending,” InMarket said in a statement. his report. “With post-pandemic consumer behavior remaining an enigma, brands across all verticals needed a plan to acquire new customers and build loyalty with existing customers. InMarket analyzed buyer visits of 11 to 180 minutes to find that, in general, brands that listened to consumer concerns and delivered value – mostly by keeping prices low – saw a above-average consumer loyalty. In many cases, those who chose to raise prices instead experienced the opposite. For example, of the top 35 brands, 24 of them exceeded their respective category loyalty averages, likely due to their value offerings.

Getting the “right” customer retention in the cookieless era of NFTs